By Eric MartinBloomberg
The money that foreigners globally send to their home countries is set to reach a record this year, fueled by transfers to Latin America and migrants headed for the U.S., according to forecasts from the World Bank.

Remittances to low- and middle-income countries are projected to grow 7.3% this year from 2020, the Washington-based development lender said in a report Wednesday. Transfers to Latin America and the Caribbean are forecast to have soared 21.6%, spurred by factors including concern about Covid-19, hurricanes, improvement in the American economy and a jump in the number of migrants traveling to the U.S.

The global increase is bigger than the 2.6% that the World Bank forecast in May after a drop of 1.6% in 2020 — far less than the 20% tumble originally predicted. Transfers from family abroad have helped to support people suffering economic hardships in their nations of origin.

Remittances likely increased 9.7% for the Middle East and North Africa, 8% for South Asia, 6.2% for sub-Saharan Africa and 5.3% for Europe and Central Asia. In East Asia and the Pacific, remittances probably fell by 4%. 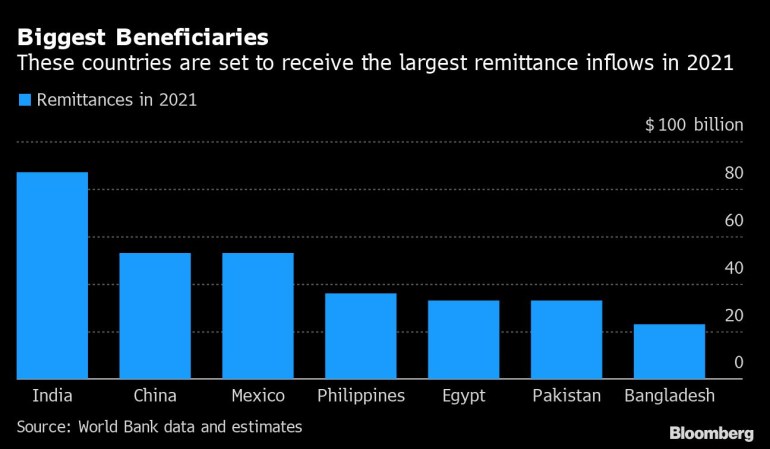 “Remittance flows from migrants have greatly complemented government cash-transfer programs to support families suffering economic hardships during the Covid-19 crisis,” Michal Rutkowski, the World Bank’s global director for social protection and jobs, said in a statement. “Facilitating the flow of remittances to provide relief to strained household budgets should be a key component of government policies to support a global recovery from the pandemic.”

Other highlights from the report:

In 2021, the top five remittance recipients are India, China, Mexico, the Philippines and Egypt

As a share of gross domestic product, the biggest remittance recipients are Tonga, Lebanon, the Kyrgyz Republic, Tajikistan, and Honduras

The cost of sending money across international borders averaged 6.4% in the first quarter of this year, more than double the 3% target set in the bank’s sustainable development goals. Remittances to sub-Saharan Africa are particularly expensive at 8%

The U.S. was the largest source country for remittances in 2020, followed by the United Arab Emirates, Saudi Arabia, and Switzerland

U.S. officials encountered a record of more than 1.7 million migrants crossing the border with Mexico over the past year. The majority of migrants apprehended in fiscal 2021 — almost 1.4 million — hailed from Mexico and the Northern Triangle of Honduras, El Salvador and Guatemala. But Covid-19 spurred hundreds of thousands of people, primarily from Latin America and the Caribbean, to head north, complicating the efforts of the Biden administration.

The increase in migrants headed for the U.S. likely is a “significant factor” behind the increase in the volume of remittances to Latin America and the Caribbean, according to the World Bank.

“In particular, the spectacular increase in remittances in Mexico may reflect funds received by transit migrants from Honduras, El Salvador, Guatemala, Haiti, Venezuela, Cuba, and many other nations,” the development lender said.

The adverse effects of Covid-19 on countries and the damage brought by hurricanes Grace and Ida also contributed to an increase in remittance flows to Mexico and Central America, the institution said.